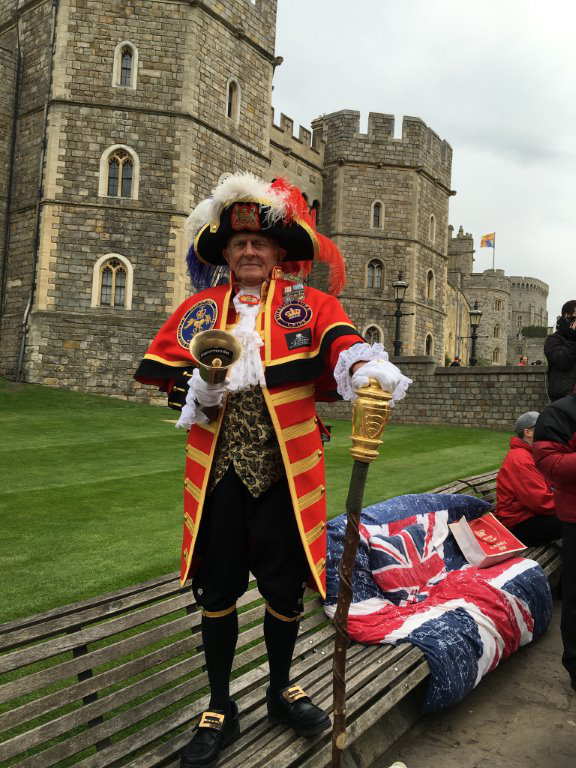 The History of the Town Crier.

Historically Town Criers – or Bellmen as they were sometimes called – were the original newsmen. The first Town Criers were the Spartan Runners in the early Greek Empire and as the Roman Conquest spread through Europe the position increased in importance until it became a position of the court.

As England colonized the world, the position of the Town Crier spread with it. Before people could read, Town Criers brought the news to the people, and served as spokesmen for the King.

Town Criers were protected by law. “Don’t shoot the messenger” was a very real command; anything that was done to a Town Crier was deemed to be done to the King and was therefore a treasonable offence.

Usually people of standing in the community were chosen as Criers, for they had to be able to write and read the official proclamations. Often they were a husband and wife team with the wife ringing the large hand bell and the husband doing the shouting.

The Town Crier would read a proclamation, usually at the door of the local inn, then nail it to the doorpost of the inn. The tradition has resulted in the expression “posting a notice” and the naming of newspapers as “The Post”.

Each Town Crier is officially appointed by the Mayor and the style of uniforms is authentic and date back to the 17th Century.

The Town Crier’s robes are similar to those of the mayor, and uniforms are usually designed, incorporating the colours of the Crier’s town.

The ceremonial tricorne is adorned with curling feathers, a traditional representation of the quills used by earlier town criers to write their proclamations.

Announcements are always preceded by the traditional “Oyez Oyez Oyez” (which is “listen” in French) and conclude with “God save the Queen”.